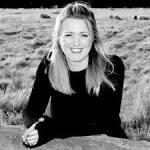 1. Can you tell us about your new book, Harley Hitch and the Missing Moon?

For Harley’s next adventure an inventive circus comes to Forgetown. Harley’s curiosity gets the better of her and she accidentally breaks a cabinet that makes things magically teleport. Soon after, everyone realises that the Moon has gone missing… Time begins speeding up, wildlife becomes disorientated, the wind gets stronger, and the tides stop. Harley thinks she’s to blame, but as she investigates, she realises that there may be more to it than she first thought, and she uses her creativity and imagination to find the solution. At its heart, the story is about learning to be yourself and embracing your differences and individuality as strengths.

2. Why do you include invention and science in your stories?

At school I loved all subjects, but science especially fascinated me. When I decided on my A-levels I discovered I was the only girl in the physics class. Deterred, I ended up swapping subjects, which, when looking back as an adult, is a real shame. But I’m a believer in things happening for a reason, and now I get to champion positive female role models in STEM, while having fun with science in my stories! I’m also fascinated by humans’ relationship and responsibilities with advancing technology, and stories are a great place to explore this.

3. What’s your favourite thing about the character Harley Hitch?

I love that Harley is such a trier, and her qualities of persistence and tenacity, even through failure, shine through. She’s also a loyal friend, she doesn’t allow people to be mean to others and will always stand up for her friends or those in need.

4. Reviewers and teachers have praised the series “girl power” message, and many young readers look up to Harley Hitch. Who are the women you look up to for inspiration?

It’s great that young readers are looking up to Harley, and that’s such a lovely part of being an author. I’m really grateful for the support of reviewers and teachers who champion the books in school. I’m often inspired by adventurous and scientific women in history who broke through barriers and achieved amazing things, such as Amelia Earhart, Katherine Johnson, Nellie Bly and Mary Anning.

5. What are you working on next?

I’ve been working on book three in the Brightstorm Adventures which is called Firesong. Arthur, Maudie, and the rest of the Aurora crew are going on a mission to the Volcanic North, where years before their parents discovered the moth that is their family symbol. But their scheming aunt, Eudora Vane, is still dedicated to destroying the Brightstorm name, and the further north the Aurora travels, the more long-buried secrets are revealed… Things are escalating in Lontown too with how the people view sapient creatures, so there is lots to get readers thinking and keep them guessing! It’s an explosive climax to the Brightstorm trilogy, and I can’t wait for the loyal Brightstorm crew to read it, and new readers too.